Even though soccer is the most played and most watched sport in the world, there is no precise time and place that can be pinpointed as it’s exact origins. Judging by the timeline below, it would seem that soccer developed through the ages based on the games local people played and eventually became what we know today – the beautiful game.

5000-300 B.C.    China: there is evidence that the military forces during the Han Dynasty played a game known as Tsu Chu, which involved kicking a leather ball into a small hole. Just like soccer, players were not permitted to use their hands.

1000 B.C. Japan: a large ball stuffed with sawdust is used in a game called Kemari by up to twelve players on a field designated by four trees.

500 B.C. Greece: a game called Episkyros is played in which two equal numbered teams would attempt to throw a ball over the heads of their opponents. White lines divided the field and the game would be over when one team was forced behind the white line behind them.

700 A.D. Britain: following a ‘legendary’ game that involved kicking about the severed head of a Danish prince who was defeated in war, the locals of East England began playing the first games of football. Games were violent and death and serious injury was not uncommon.

1331 Britain: celebratory games of football were still widely popular despite their violence, however King Edward III passed a law to stop the game. Could you imagine the outcry on betting apps if this had to happen today?

1500 Italy: Calcio is played by teams of over 27 people each and involved kicking, carrying, and passing a ball across a goal line. 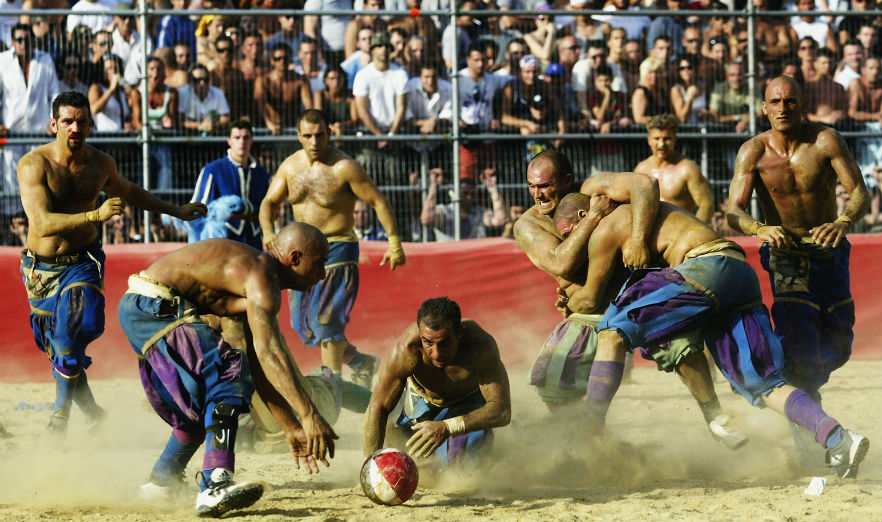 1600 Alaska and Canada: a game known as Aqsaqtuk is played on ice using a ball stuffed with grass, animal fur, and moss.

1620 North America: the First Nations of the Jamestown settlement played a game known as Pasuckuakohowog, meaning “they gather to play ball with the foot”.

1815 Britain: a set of football rules is decided upon by Eton College of England.

1820 USA: soccer matches are played between the Northeaster Universities and Harvard, Princeton, Amherst, and Brown.

1862 USA: the first soccer club outside of England is established in Boston as the Oneida Football Club.

1863 Britain: the Football Association is formed when eleven London schools and clubs come together to establish the rules of any football match played amongst them.

1872 The first official international soccer match is played between the national teams of Scotland and England on November 30th, which finished in draw.

1900 Soccer is played at the Olympic Games for the first time.

Delegates from Denmark, Spain, the Netherlands, France, Belgium, Sweden, and Switzerland establish 1904 FIFA on May 21st.

1930 The 1st FIFA World Cup is held in Montevideo, Uruguay between 13 teams.

Since soccer’s humble beginnings on the dusty fields of an incredible array of countries, the game has developed into the most popular game in the world. Estimated to be played by 250 million players across 200 countries, it’s no wonder that soccer is known as ‘the beautiful game’.