The World’s Most Ridiculous Sports

In a world where virtually anything goes, it’s no surprise that there are some crazy sports out there. While the rest of us are teaming up to play rugby or soccer, or getting in our laps on the track, there are others taking on some of the craziest sports we bet you’ve never heard of. Have a look at some of the world’s most ridiculous sports:

Buzkashi is a form of polo played in Afghanistan and Central Asia. Doesn’t sound too crazy right? Except that it is played with the headless corpse of a goat! Played on horseback, a Buzkashi match can last for days with players trying to dislodge each other to get to the goat. Sometimes whipping techniques are even done to achieve this goal and it is said that players even try and kill each other to win. Sounds pretty barbaric.

An extremely popular sport in South East Asia, Sepak Takraw may sound pretty ridiculous but it’s actually really fun and super competitive. Similar to hackysack or volleyball, the game features two teams of three players who face off against each other as they attempt to high kick a woven ball over the net. It’s half kung-fu, half volleyball and very entertaining to watch.

Popular in Finland and Estonia, Eukonkanto is the game of wife carrying. People travel from all over the world to compete in the annual Finnish Eukonkanto championships with the winner said to receive his weight in beer. It isn’t as simple as running along with your wife on your back though, a range of obstacles are thrown in the way to make this sport a real challenge!

Yağlı Güreş is actually one of the world’s oldest official sports with championships running continuously in Turkey and the Balkans since as far back as 1357. Yağlı Güreş is essentially wrestling in oil, almost naked.

You may never have thought that chess players and boxers would ever be seen in the same space, but this is exactly what happens with chess boxing. Combing both brains and brawns a chess boxing match consists of eleven three minute rounds with the players partaking in both chess and boxing in alternate rounds. Get checkmated or knocked out and you lose. This odd sport is surprisingly popular in Russia, Germany, India and even the United Kingdom.

The Argentinian game of Pato is a combination of polo and basketball. Today it is played with a ball that has six handles but originally it was bizarrely played with a duck. Quite a violent game, players need impressive horse riding skills to avoid being ripped from their saddles. 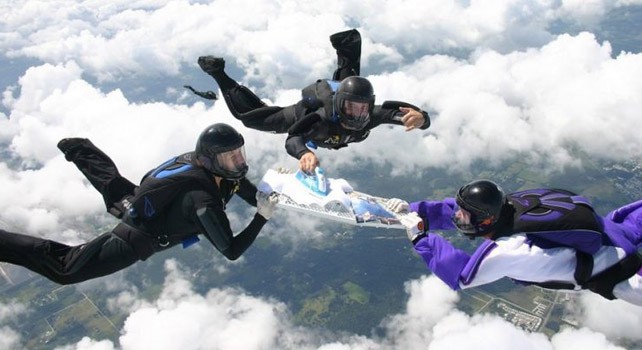 One of the most extreme sports of all time happens to involve the most mundane of tasks – ironing. The game took off when one bored man starting the challenge in Leicester some twenty years ago. The aim of this sport is to iron in the most extreme places – be that on the top of super high mountains or in extreme arctic conditions. Players win by breaking some pretty ridiculous world records.